Here are some thoughts about our recent session at the AAM conference in DC. You can read more at Anne Ackerson and Joan Baldwin’s Leadership Matters blog.

As I said to my three colleagues, rarely do things in life turn out the way you imagine they will especially when four busy women from four different states don’t have an opportunity to meet as a group before the actual event. But it worked. I hope we laid to rest some of the myths people struggle with, while providing ammunition for women battling bias, sexist language and inequitable treatment in their workplaces. Our goal now is to create a framework that will carry this work forward.

I know Anne, Jessica and Marieke join me in promising that we don’t want to be in the same place next year. In the coming months, we plan to re-vision the short-lived, early 1970s Women’s Caucus with a more inclusive equity mission, and we’re hoping that you will support our efforts. Beyond that, we need to know what will help you as working museum women.

Please take a moment, and send us your top three choices for making change for women in the museum world. You can use the comment feature on this blog or email us at leadershipmatters1213@gmail.com. Finally, we’ll continue to need your great ideas and talents to keep this effort going. Let us know how you can help. 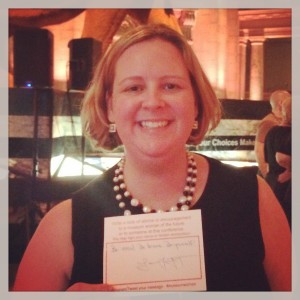 Now feels like the right time, doesn’t it? Our AAM 2016 conference session, “What We Talk About When We (Don’t) Talk About Women in Museums,” definitely captured the essence of the conference attendees. Addressing directly the conference theme of “Power and Responsibility” we talked openly about several myths surrounding women in the museum workplace, from what it means to be a feminist to the passive approach our field takes to creating pay equity.

And it felt good! It felt good to talk about these myths, and it felt really good to debunk them. This was the first time I’ve talked about these issues in a cavernous, poorly-lit convention center conference room. What was once a head-shaking, “can you believe it?” conversation between colleagues, work buddies, or spouses is now out in the open! It definitely felt like the right first step in a very right direction.

Here’s what I’ve been talking with colleagues about since I got back home:

It was a young, female crowd. As I looked out into the sea of faces, the group looked female and under age 45. Why did this group self-select to talk about this issue? As a mid-career professional, I crave the knowledge and wisdom of the museum workers who have gone before me. Why didn’t our more experienced colleagues join us?

Our colleagues have families, and they bring them to conferences! Laura Lott, President and CEO of AAM, told a story about bringing her (well-behaved!) daughter to a work event. It was met by many nodding heads in the audience. The morning after our session, I noticed several families –with mom wearing an AAM lanyard–in line to get pancakes in the hotel’s breakfast line. And a bunch of little ones on hips at the closing party. Should there be a distinct work/life break at the conference or can it blend like our work/life balance does back home? Maybe there should be a daycare center in the Expo. I for one would love some kid-therapy in the middle of a day of sessions. We could even put them to work…testing exhibit prototypes, telling museum knock knock jokes, sharpening colored pencils for our adult coloring books…the possibilities are endless! All joking aside, is there a way to better acknowledge, accommodate, and leverage the family power coming to our conferences?

We *can* talk about women in museums. Our session title was tongue in cheek, but it felt really good to know this is a situation we are all in together, and that we can talk about it. Maybe it was a result of the crowd skewing younger, but it felt like the group really wanted to talk about these issues openly, on social media. And not in a closed Facebook group, the museum workers who came want to talk about these issues on Twitter, a very public, global channel. It’s great and scary at the same time. How do we transform a once-hidden problem into a movement for change with our colleagues from across the world watching?

I know I speak for my fellow presenters when I say we don’t want this session, these raw emotions, this push for change to languish until we see you all again in St. Louis next year. We’re working on it, and we know you are, too. Thank you for coming to the session and voicing your thoughts; your presence did not go unnoticed. Remember: together we can make museum work better! 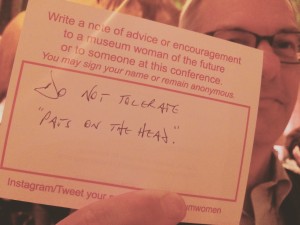 I had the privilege of standing alongside Joan Baldwin and Anne Ackerson of Leadership Matters and Marieke Van Damme of Joyful Museums to discuss gender equity in museums at the American Alliance of Museums conference in DC this past weekend.

At first, we were a bit worried about the fact that our session was slated for 8:45am…on a Saturday. During Memorial Day Weekend. But our worry subsided when over 100 people showed up (mostly women, but also some allies in the room) and everyone was ready to share their stories and discuss issues of gender equity in museums. There was a LOT to talk about, as you can imagine.

We had several goals when walking into our session:

To empower attendees (and those Tweeting in or those who will listen to the recording later) with stories and information;

To help make a change in our careers and institutions;

And to spark a movement towards gender equity in museums…with everyone in the room, not just the women.

I believe we’re really on to something with that last one. The energy in the room was one of hope and confidence in the ability to move this agenda forward. There was a sense of camaraderie, an acknowledgement among many of these women that, “Hey, we’re not alone.”
This all feels like a reboot of something that should have been rebooted long ago: In the early 1970s, the Women’s Caucus was created within AAM. Yet, within a few years, the caucus was dissolved because the women leading the charge thought the goals of the caucus had been accomplished.

Here we are, some 40 years later, and the reasons for creating the caucus are still prevalent today. And after AAM 2016, I think we’ve found some great inspiration to start something up again. We just need to make sure we keep up the momentum!

With that in mind, we’d like to ask you, the AAM attendee, the blog reader, the museum worker: how do we move forward? What does change look like?

In the Twitter world, quite a few people have expressed interest in a monthly Tweet Chat around this topic.

In the real world, many have expressed interest in starting up another caucus or coalition. Or of putting together some “best practices” or a manifesto about making museums more equitable.

We’d love to hear more from you about what we can do next. Please take a minute to send us your ideas!

For more notes about our session, check out Museum Hack’s live notes.

You can also see what people were talking about on Twitter in our Storify, here.

The Arcade Basic Theme by bavotasan.com.